Apologies to Ann Peebles for the poor word play.

The hike out of Roan Mountain TN was beset with gobs of rain and mud. I wasn’t too happy with the wet feet situation, again. But I signed up for this and the problems only heighten the more gracious moments. Moments that only happen in the trail after days and days of wondering why I am even doing this. I planned on doing an in more depth post about emotions, but for now it is suffice to say that the weather can directly affect how you feel about everything that day.

The never-ending rain actually made the delicate scents more prominent. I’d been smelling roses for awhile but didn’t see anything. I began to wonder if I was having some sort of smell hallucination, perhaps yearning for cleaner drier times? Then I came over a hill and the entire field was laid out with what looked like wild Cherokee roses decimated by the weather. Their powerful scent still permeated the air. Laid underneath the rose smell was the earthy base of wet dirt and clay. Occasional notes of something bright, perhaps citronella, would enter the mix. All of these smells formed a perfume that you only get when you are wet and betrodden in the forest and I’m glad I was there to experience it. 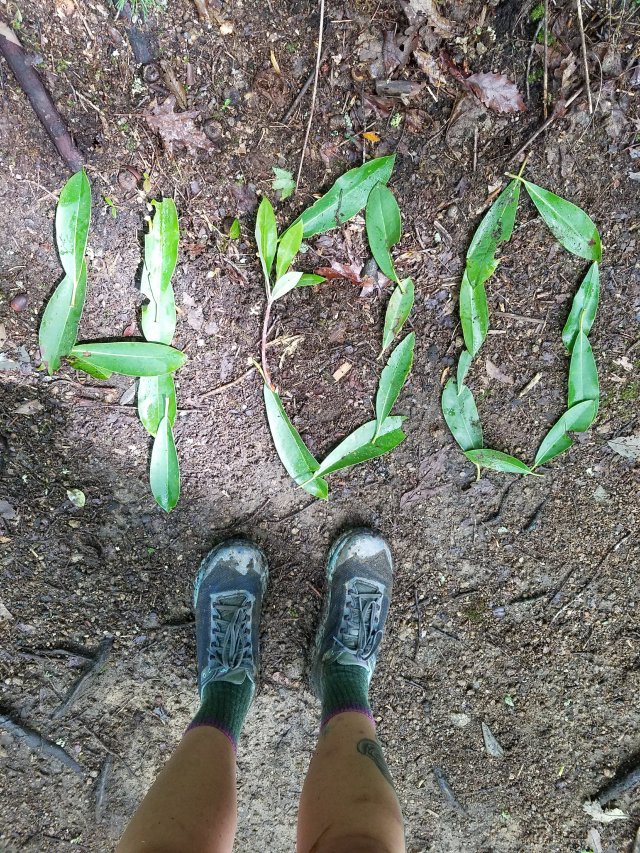 Just before Hampton TN it was a beautiful sunny day and the hike went by Laurel Falls and the river. The trail would been impassable the day before with all the rain. We went to a hostel to get dried and cleaned up. They only had tenting so I got that set up. That evening a huge thunderstorm came rolling through and got everything wet again. Womp womp.

The trail around Watauga lake was flooded so we were rerouted to the road for awhile. To honest I was fine with it because I didn’t bring my kayak. The day was mostly sunny with the afternoon bringing more thunderstorms. This time though I made it to the shelter just in time and stayed dry…mostly. A rainbow formed as the sun flickered through the clouds. It was quite the spectacle. Everyone came out of the shelter to look at it and that rainbow was probably the most admired for miles around.

The next day was an epic thunderstorm that flooded the trail again. I don’t know why I bother trying to keep my feet dry. I stopped by this monument to a hermit.

Made it into Damascus out of the rain and I got a care package from my friends from roller derby. They sent me a card with words of encouragement that really lifted the spirits and Twizzlers! I stayed at a nice little B&B called the Lazy Fox inn which was appropriate because my roller derby name was Foxfire. Now I’m dry, clean, rested and ready to head out into Virginia.